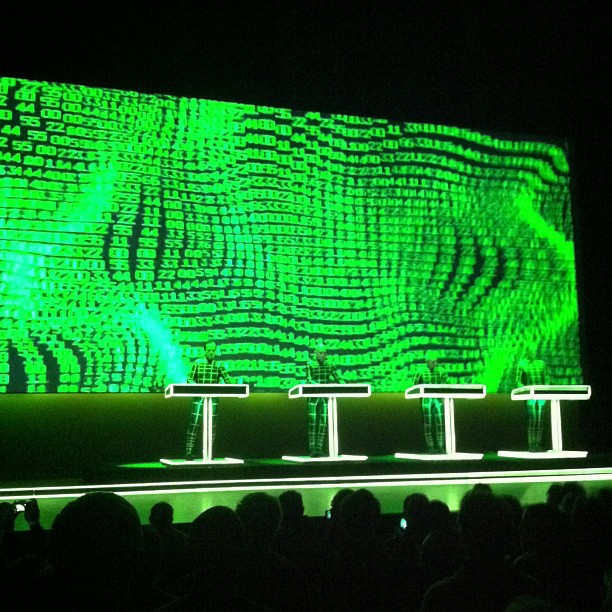 Back in early December, the Tate Gallery’s website crashed due to huge demand placed on it by music fans trying to get tickets to the Kraftwerk shows to be held in the Turbine Hall – 8 shows on consecutive nights, each focusing on a different album from their history. With only 700-odd people allowed in per night, demand was bound to outstrip supply, and thousands were left disappointed.

There was a precedent for this. A similar situation occurred in April 2012, when they played the same set of shows at The Museum of Modern Art in New York, so Tate could have handled it better. Or could they? I’m not generally a conspiracy theorist, but was the exact copy of the MOMA ticketing fiasco a deliberate and planned part of the marketing process and the hype? It certainly created a huge buzz, and people who ordinarily couldn’t have cared less about Kraftwerk were suddenly interested, so maybe this was all part and parcel of the marketing of the event. Because at this point it ceased to be just a band playing a few nights, and really did become an Event.

So were they worth it? Having never seen Kraftwerk before, I have nothing to compare this lineup to, with Ralf Hütter the only remaining original member, but I have to say the entire evening was absolutely thrilling. The night we were there was ostensibly about ‘The Mix’, the 1991 album that remixed and reworked many of their hits, so even though I was familiar with the majority of the back catalogue we were spoiled by knowing most of the material pretty well. So what we were treated to was pretty much a greatest hits set, finished off with a few tracks from ‘Tour de France’ and ‘Techno-Pop’.

What came across most strongly was a reminder of just how embedded Kraftwerk’s music is in popular culture – so much of it has been sampled, reworked, covered, or otherwise stolen by other musicians or artists, it’s almost a shock to hear it played by its originators. And what beautiful, timeless sounds they played. I’ve always loved electronic music, but even so I’m still occasionally surprised when it sounds so warm, and bizarrely human, and here coming from a group who present themselves as robots. The sound in the Turbine Hall was crystal clear, but packing a satisfying bottom-end thump when necessary. The lasting impression though, was of a perfectly realised combination of sound and astonishing 3D visuals. Sometimes paying humorous homage to the 70′s and others looking bang up-to-date, the imagery across the huge screen was sometimes disorientating, others jaw dropping. Free of the requirement to make anything look ‘real’, the more abstract graphics worked best – frequently it seemed that by reaching up, you’d be able to touch these floating shapes, so effective it was. The one time they resorted to the cheap trick, when a satellite zoomed out of the screen at the end of ‘Spacelab’, elicited a delighted gasp from the audience. Finally though, I’ll be amazed if after this, we don’t see this technology employed far more frequently in corporate events, it was that good.

It seemed right that as the evening drew to a close, the sound gradually changed and the song they ended the night with, 1986′s ‘Musique Non-Stop’, sounds itself something akin to a late 80′s hip-hop track using a Kraftwerk sample. There’s a poetic justice in them assimilating the form of music that plundered them so successfully, back into their own sound. In presenting these albums as a chronological retrospective, and in an art gallery no less, Kraftwerk show that they’re only too aware of their own incredible legacy. A perfectly realised mixture of audio and visual, and a wonderful evening. And of course, a sold-out cultural event.